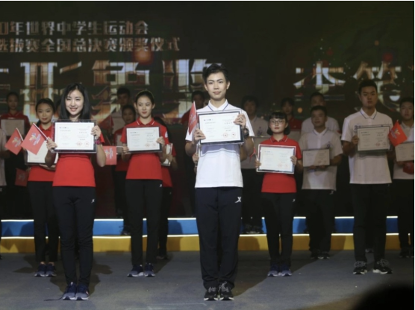 Photo taken on August 17, 2019, the awards of the image ambassador competition of 2020 Gymnasiade were announced

On the evening of August 17, the national final of the image ambassador selection competition of the 18th Gymnasiade was held in Jinjiang, southeast China's Fujian Province, along with an award ceremony. Sixty outstanding middle school students from all over the country gathered in Jinjiang to compete in oral English, and show their diverse talents and their youthful energy.

It lasted ten months and covered 210 schools in 22 cities across the country. After the preliminary contest, the semi-final contest, and the finals in five major divisions, 60 outstanding contestants finally stood out and got a pass to the national final.  In the final, there were three rounds of competitions, including English speech on a given topic (Better Us, Better Future), a talent show, and Q&As in both Chinese and English to test the contestants' overall quality.

The competition aims to prepare for the 2020 Gymnasiade, and provide a stage for Chinese middle school students to show themselves, improve themselves, steel themselves, and show the charm of Chinese teenager students in the new era to the world.