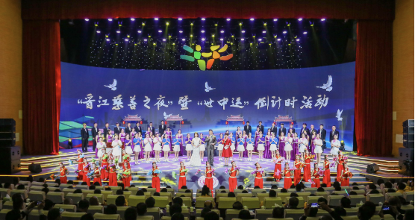 December 18 is the annual "Charity Day" in Jinjiang, southeast China's Fujian Province. At that night, Jinjiang Charity Night was held at the party school of Jinjiang municipal committee, along with launch of countdown to Gymnasiade 2020. Amid singing and dancing, it brought together a party of many distinguished friends, including five million representatives of Jinjiang at home and abroad and guests and friends from all over the world. They chatted cheerfully about the bond shared between them as they came from the same place and witnessed the official launch of a countdown to 2020 Gymnasiade. With a great passion for their hometown and generosity, Jinjiang people donated 580 million yuan to support the preparations of Gymnasiade in Jinjiang and the construction of Jinjiang Scientific and Educational Park Gymnasium of Fuzhou University to contribute to the development of their hometown.

Liu Wenru, secretary of the Jinjiang Municipal CPC Committee said that looking back to the past 40 years since China's reform and opening up, every step Jinjiang has made in development has resulted from the concerted efforts of Jinjiang people at home and abroad. As the practitioners of "Jinjiang experience," Jinjiang people have spared no effort to support and participate in the reform and development of Jinjiang and the bid of Gymnasiade, jointly created a series of development miracles and created a precedent for county-level cities to hold comprehensive international events since the founding of the People's Republic of China. They have carried forward "Jinjiang spirit" and declared to the world with their actions that "they come from Jinjiang." They have mustered up "Jinjiang strength," not only doing business across the world but also doing good around the globe so that Jinjiang enjoys a widespread reputation for benevolence.

Liu added that to build a better hometown is the common aspiration of Jinjiang people at home and abroad.  At present, Jinjiang takes the opportunity of the competition preparation to accelerate the construction of an international and innovative quality city and tries its best to become a model in terms of economic development among counties across the country and a model for small and medium-sized city construction.  Liu hoped that Jinjiang people at home and abroad will work together to build an airport, and help the city to hold significant events, such as the Gymnasiade, and build Jinjiang Science and Education Park of Fuzhou University, to maintain a fantastic event jointly, and help the university to become well-known and Jinjiang move towards a better future.

Jinjiang people at home and abroad were all delighted to hear about the news that Jinjiang won the bid for 2020 Gymnasiade.  World champion Lin Chaopan and Shi Jialuo, representatives of famous athletes from Jinjiang, also attended the countdown event to cheer for their hometown to ensure the smooth running of the upcoming Gymnasiade.

Jinjiang people have always been charitable. No matter they are at home or abroad, they have a deep sense of belonging to their hometown and have always supported their hometown's development and construction. Generous benefactors donated a total of 5,625.3 million yuan and 240,000 U.S. dollars during the event to support the smooth running of the upcoming Gymnasiade, and the construction of Jinjiang Scientific and Educational Park Gymnasium of Fuzhou University and Fujian Institute of Intelligent Manufacturing of the Chinese Academy of Sciences. Leaders at all levels awarded a charitable donation plaque to the benefactors. The donation hotline and WeChat QR code released at the event ignited the passion in the city. During the event, a total of 51 hotline calls were received, with donations of 1,509,000 yuan. As of last night, a total of 580 million yuan had been donated. These donations will inject into the sports foundation, education foundation, and various charities of the Jinjiang Charity Federation, with a fixed sum for a set purpose.

At the end of the Charity Night, led by Zhang Mingmin, a famous singer from Jinjiang, the audience sang "I am from Jinjiang", bringing the event to a climax. The passionate and high-spirited singing showed the confidence and resolve of Jinjiang people at home and abroad to work together and seek common development.