At the Beijing 2022 Winter Olympic Games that just wrapped up, the unique confidence of the Chinese nation can be noticed, and ubiquitous made-in-China products have impressed the whole world. Products made in Jinjiang also shined at the event. From sneakers, zippers, and tissues for the Tiangong space station to tech-savvy products for the Winter Olympics, Jinjiang manufacturers are never absent whenever the country needs them. Jinjiang products provided for the Winter Olympics reflected the overall scientific and technological innovation level of local entity industries.

At the Beijing Winter Olympics, Chinese athletes showed outstanding performance, and Jinjiang brands, such as ANTA, Panpan Foods, and Shuhua Sports, were also extremely popular among athletes all over the world.

From President of the International Olympic Committee (IOC) Thomas Bach's down jacket at the opening ceremony, to China's gold medal maker in snow sports Eileen Gu's sportswear; from fitness equipment in the Olympic Villages to snacks posted by athletes on their Vlogs; from tissues and wipes provided for athletes and volunteers to the popular Bing Dwen Dwen toys… Jinjiang products can be found everywhere at the Beijing Winter Olympics.

Clothes are the most visible and essential products at the Winter Olympics. A lightweight, warm, pretty and comfortable sports suit is an essential guarantee to finish the competition and an eye-catcher at the Games.

Chinese and overseas audiences were deeply impressed by Chinese freestyle skier Eileen Gu, who made her stunning jump in a ski suit independently developed by ANTA featuring a Chinese dragon designed by herself. With the superstar effect, ANTA became a trending topic on Weibo and TikTok. On February 8 when Eileen Gu won the gold medal of the women's freestyle skiing big air, ANTA's WeChat index soared to 205 million.

Aside from competition suits, other ANTA products can also be found everywhere at the Beijing Winter Olympics.

Numerous online audiences were interested in the ANTA jacket worn by IOC President Thomas Bach when giving a speech. They looked for the same down jacket at ANTA's Tmall store, and other platforms such as Weibo, WeChat and TikTok.

Athletes, referees, IOC President, CCTV broadcasters, volunteers and torchbearers all wore ANTA clothes. ANTA also sponsored the award ceremony outfit for the Chinese teams, torchbearer uniforms and official suits for the IOC. ANTA logo can be found at every competition during the games, becoming the brand most frequently captured by the camera.

"It is a grand sports event held in China. As a homegrown professional sports brand, we have supported China's sports cause for many years. It is our responsibility and mission to contribute to the Winter Olympics," a source from ANTA said.

As food is the staff of life, it is always a key necessity in sports events. The Jinjiang brand "Panpan Foods" can be found everywhere at the Beijing 2022 Winter Olympic Games.

Panpan Foods are available in the Olympic Villages, lounges of all competition venues, hotels for international officials, reception venues of state banquets and even the sites of media interview after the games. 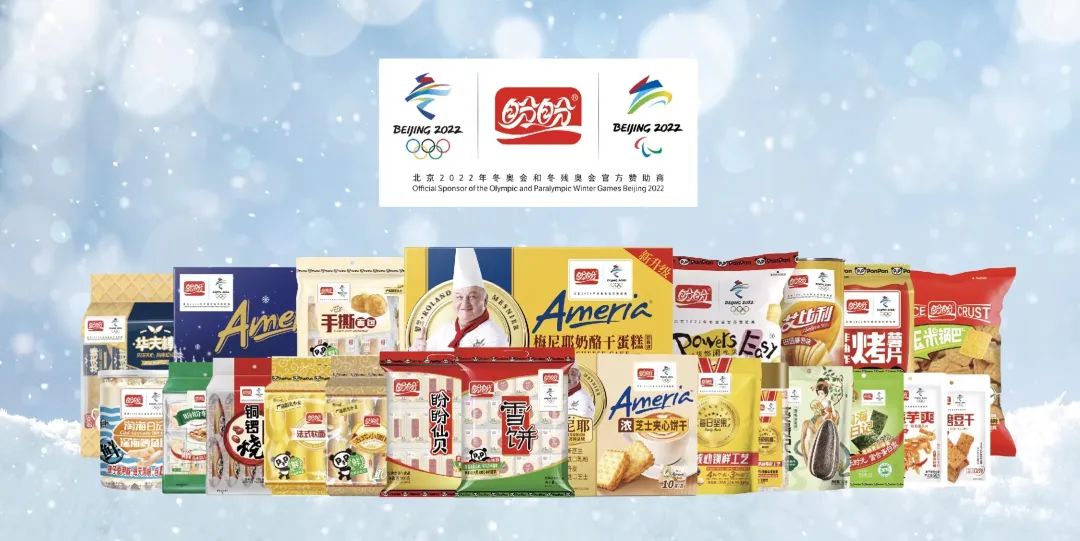 During the media interview after the competition of snowboard halfpipe, the scene of a U.S. snowboarder "asking for food" is widely spread among Chinese netizens. Jens Burman, a Swedish cross-country skier became a KOL of Chinese snacks and shared an 8-minute Vlog about Panpan snacks at a We-Media platform; Panpan foods held a central position in the Winter Olympics Vlog produced by Czech athletes; British athletes excitedly showcased diversified Panpan snacks via social media...

As an official sponsor and the exclusive food supplier of the Winter Olympics, the Jinjiang-based Panpan Foods delivers 32 products that meet the "Olympic standards". Totally 20 million pieces (bags) of Panpan foods are expected to be provided to the Winter Olympic and Paralympic Games.

"We specially developed products like granola bars and freeze-dried instant noodles with consideration of both nutrition and convenience as far as possible, so that athletes can replenish energy more quickly", said Song Changzhen, the assistant to Chairman of Panpan Foods Group.

It is noticed on several social media platforms that the disinfectant wipes and tissues branded with Mind Act Upon Mind frequently appear in the videos on the daily life at the Winter Olympics posted by athletes and volunteers.

Such products like disinfectant wipes and tissues are available at the restaurants, training bases, conference rooms and leisure places in the Olympic Villages to provide athletes and volunteers with basic disinfection and sanitary protection.

A source from Heng'an Group said that, as a flagship brand of the company, the Mind Act Upon Mind always has wide coverage and a good reputation among consumers, and being selected as an official brand of Winter Olympics shows the market recognition of the brand.

The fitness centers frequently visited by athletes are highlighted by Shuhua Sports, another Jinjiang brand.

As an official sponsor of the Beijing Winter Olympics, Shuhua Sports provides nearly 1,000 sets of gym equipment to the fitness centers in three Olympic Villages, covering aerobic training, strength training, physical training, etc. Its serial products offer comprehensive training and services to athletes from all over the world and meet their diversified fitness needs.

Furthermore, in light of the characteristics of snow events, Shuhua Sports provides professional training equipment to the Chinese team in the Olympic Village in Zhangjiakou, including thigh squat rack, spinning, high-end rowing machine, and yoga mat, to help Chinese players better warm up and recover.

In addition to the medal winners of the Winter Olympics, the mascot Bing Dwen Dwen has become an extremely popular "internet celebrity".

As the franchise producer of Bing Dwen Dwen, Hengsheng Group in Jinjiang also rose to fame at home and abroad.

As a manufacturer engaged in stuffed toys over the past three decades, Hengsheng Group received over 1 million orders for Bing Dwen Dwen in less than a week and had to extend the production schedule till this April.

Xu Wenjie, chairman of Hengsheng Group said: "Bing Dwen Dwen is the symbol of the Beijing Winter Olympics and also a symbol of made-in-China products. So we have to make it a hundred percent perfect." To the company, the mascot brings made-in-Jinjiang products to the world, which is far-reaching significance beyond a single toy.