Technology is playing an increasingly important role in maximizing athletes' performances in winter sports. The Beijing Winter Olympics has come up with innovative high-tech standards, delivering China's promise to make the Winter Olympics a smart sports experience. Jinjiang's high-tech enterprises have also played crucial roles in the games and the athletes' pursuit of career ambitions.

In the short track speed skating field where the final result is accurate to a thousandth of a second, the high-tech equipment and sportswear can really power the athletes. On the evening of Feb 5, the short track speed skaters who won the first gold medal of this Winter Olympics for China had benefited from wearing Anta's specially designed sportswear. State-of-the-art tech features heavily in the newly designed short track speed skating suit, which has significant air turbulence control technology and high-resilience materials to reduce wind drag on the track. The suit has reached the world-leading level in terms of lightness, ventilation and other indicators. 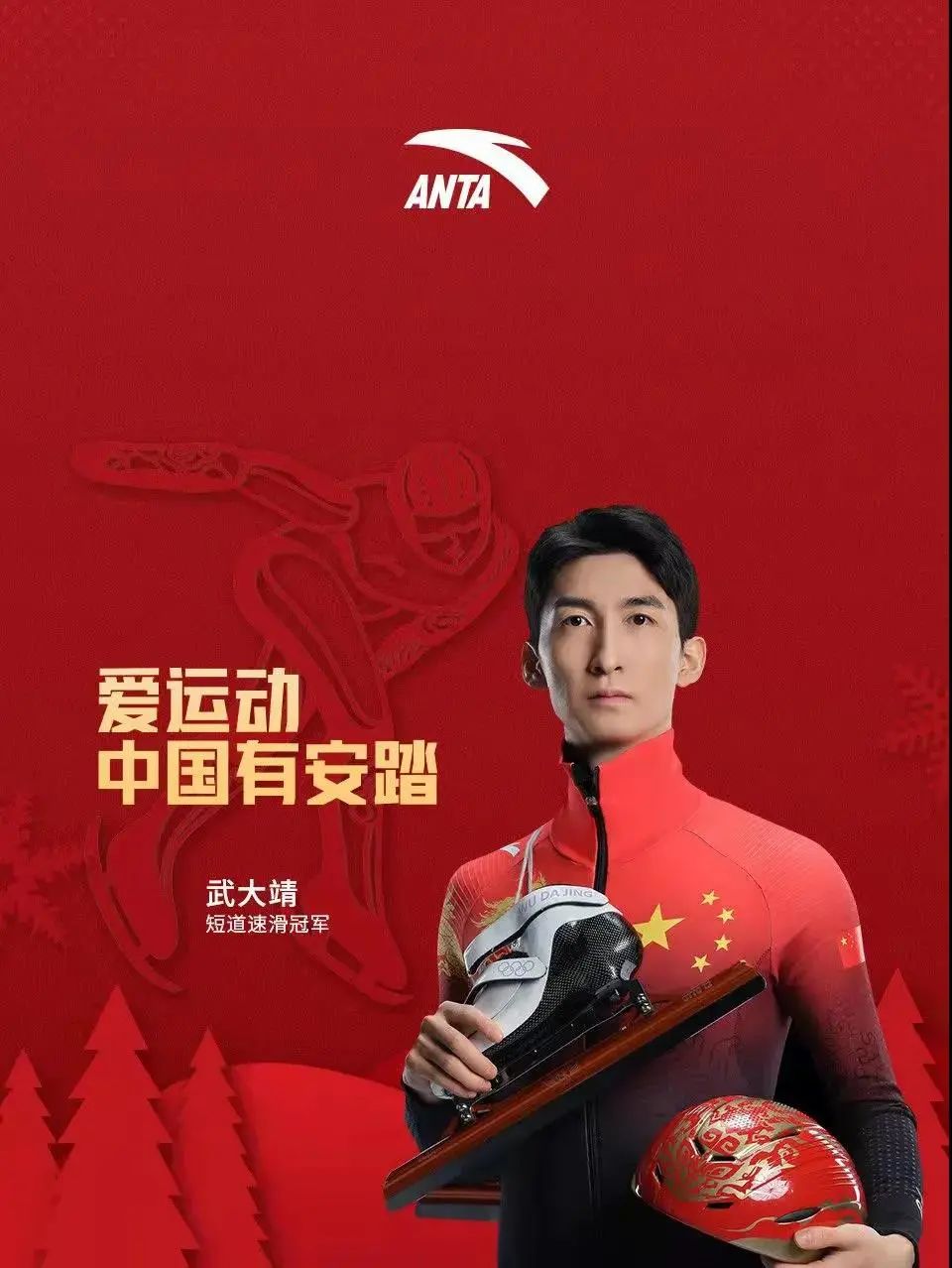 As a sponsor for the 2022 Beijing Winter Olympic Games, Anta provided sportswear and equipment for 12 of China's squads, involving short track speed skating, alpine skiing, skeleton, etc. Anta is the sports brand that supported the Chinese teams most with high-tech equipment and sportswear at the Winter Olympics.

Jinjiang technology plays an indispensable role both on and off the playing field.

"Panpan" food can be found not only in the Olympic Village, but also at the competition venues, in the hotels where international officials stay, and on the table of state banquets. As the official sponsor and exclusive food supplier of the Beijing 2022 Winter Olympics, Panpan Foods provides 32 varieties of food for the Winter Olympic and Paralympic Games.

"Among these 32 products, the oatmeal stick and the freeze-dried instant noodles are specially developed to keep the nutrition and maximize convenience, so that the athletes can replenish their energy more quickly," said Song Changzhen, chairman assistant of Panpan Foods, adding that the development of these products had gone through procedures like formula development and adjustment, food safety test, and sample confirmation for nearly a year.

And as one of the official fitness equipment suppliers for the event, Shuhua Sports brings nearly 1,000 pieces of equipment for aerobic training, strength training, and physical training to the fitness centers of the three Winter Olympic villages, providing comprehensive training guarantee and services for athletes from all over the world.

"We've been holding regular seminars for product technology, focusing on ergonomics, functional design, intelligent technology, and other aspects of the equipment. We want the power of Chinese brands to be seen and known by everyone through science and technology," said a source from Shuhua Sports. According to the company, the latest series of strength training equipment is a self-developed product, and the innovative design of the 3D cohesion structure gives more power to the product image, which also perfectly meets the functionality of the product.

More Bing Dwen Dwen toys are made in Jinjiang

Since the Beijing Winter Olympics kicked off on Feb 4, the cuddly mascots Bing Dwen Dwen and Shuey RhonRhon have soon become the favorite of athletes, the media, and the public. The Bing Dwen Dwen toys have once sold out at officially licensed online retailers and many physical shops. As one of the licensed commodity manufacturers for the Beijing Winter Olympics, Jinjiang Hengsheng Toys Co., Ltd., located in Longhu, Jinjiang, has been working at full capacity on manufacturing this new top-selling mascot doll since Feb 5. "The company offered free air tickets to workers willing to cut their vacation short and ready to resume work, and we're glad to see that over a dozen of them have come back to work by Feb 8," said Lian Hai'an, the general manager of the company. He added that so far, the company has brought into use dozens of new molds and deployed workers to outsourcing toy factories, doing all they can to meet the production demand for extra orders of more than 500,000 sets of Bing Dwen Dwen.

From drawings to finished dolls, the production of Bing Dwen Dwen should go through complex procedures like pattern making, embroidering, fabric printing, cutting, sewing, stapling, and packing, with continual comparing and refining to make sure they're perfectly made.

Long before becoming the licensed commodity manufacturer for the Beijing Winter Olympics, Jinjiang Hengsheng Toys Co., Ltd. has been known as one of the designated suppliers for mascot toys of Athens 2004, Beijing 2008, and London 2012 Olympic Games, as well as the Asian Beach Games.

"We've been making toys for over three decades, and this is the first time we've seen a plush toy combine with silicone coat," Lian said, adding that the biggest challenge in production was to present the ice ribbons on the silicone face. Being different from other mascot toys the company had made, Bing Dwen Dwen is a plush panda doll enveloped in a crystal silicon shell, resembling a cute astronaut.

The surge in demand for Bing Dwen Dwen merchandise offered a new path for Jinjiang's manufacturing industry in constant breakthrough and technology upgrade. In Lian's opinion, participating in the development and production of the mascot merchandise may not only enhance the company's capability in research and development but also bring the strength of Jinjiang's manufacturing to the attention of more people.

As the official sponsor of the Beijing 2022 Winter Olympic Games, Panpan Foods has seen its products popular with athletes all over the world.

The IP image of Panpan Foods is a charmingly naive panda called PP Panda, and it resembles a sibling of the Beijing 2022 Winter Olympic Games mascot Bing Dwen Dwen. In the Olympic Village, competition venues, hotels where the international officials reside, and the reception sites, products of Panpan Foods are ubiquitous and have become the food and snacks tasted, posted, and shared on social media by athletes. Moreover, those athletes are full of compliments for products of Panpan Foods Corporation like "intimate, grateful and delicious".

In the vlog shot by a Czech athlete, he shared his first experience in the Olympic Village and showed his thanks for what China has done for them. In the video, the gift packages of Panpan Foods are extremely eye appealing. A British athlete excitingly demonstrated the abundant snacks provided by Panpan Foods and he was extremely fond of them.

In the self-service areas of competition venues, Panpan products are also popular among athletes all over the world. An athlete from Swiss has shot an 8-minute vlog sharing his experience at the Beijing 2022 Winter Olympics. In the vlog, he showed three types of Panpan snacks which are all his favorite, including crisps with wheat and chicken flavor, Swiss rolls, and waffle. Compliments like "great", "it tastes like a classical Swiss roll" and "it has the taste of cheese and corn" are frequently used in his vlog. A journalist of a Japanese TV station has tasted and shot videos of cuisines in the Olympic Village. In the video, Chinese dishes like noodles with stir-fried tomatoes and scrambled eggs, beef noodles with pepper flavor, and marinated eggs were showed. The video has gone viral on social media with netizens forwarding and commenting like "we finally have Panpan instant noodles", "Panpan nuts are yummy", and "it shows the rising popularity of Chinese brands".

In the self-service areas of the competition venues, Panpan buns, nuts, and sugar-glazed biscuits are all welcomed by athletes all over the world.

"Beijing 2022 Winter Olympics is so popular that many of our products sold out very quickly. Right now, all our factories in China are proactively working around the clock," said Song Changzhen. To meet the demand for orders coming through different channels, the factories of Panpan Foods responsible for providing products for the Winter Olympics did not stop work during the Spring Festival, and factories in other areas also start working early before the end of the holiday, noted Song. So far, dozens of factories of the comapny have comprehensively started production.